10 Things You May Not Want to Know About China

10) Don't drink the water, rinse dishes without sanitizing them, or brush your teeth with the water.

9) Prior to the Beijing Olympics, protestors and concerned citizens were told to fill out forms so they could protest legally. A few days before the Olympics the people who filled out these forms were picked up and detained for questioning. When the foreign camera crews were taken to the protest area empty. They were stunned to find no protestors in China.

8) Many decisions are based on will it give face or not. Face is the avoidance of embarrassment (perceived or real) at any cost and to give face is to give status to another (allowing them to help you, praise them in public, showing respect, etc.)

7) When toasting in China: Ganbei!!!! Make sure you put the rim of your glass lower then than the other people you clink glasses as a sign of respect. Sometimes, a game is made out of it this practice and friends will toast down at floor level.

6) Power, gas and water need to be purchased before you use it and you don't receive a bill. And if the prepaid amount runs out the service will just stop. You can't send a check, and as of a year ago, you couldn't pay with online banking. A member of your family or your maid needs to go down to the offices with a stack of cash to put money on your card, then your card must be put into your meter (gas/electric & water) so the credit for the payment can be registered.

5) While dining out, most Chinese would never take home the left overs because that would suggest you were poor. (I've horrified more than one Chinese friend by requesting the leftovers be packed up).

4) Recycling of leftover food in local restaurants isn't unheard of... meaning food served and passed over by other customers could arrive at your table after it was reheated.

3) There's no social security. Your child and grandchildren are your family's security, that's why it's very rare to find an unmarried Chinese person. Usually women are married by the time they are twenty-five and men maybe a little bit older. There are still active marriage markets where the parents take the picture of their children, along with a resume of talents and jobs, to share with potential in-laws.

2) The word for question in Mandarin is the same for problem, so to have a question is to have a problem. Many people won't ask questions so work can be done wrong or not done at all.

1) There is no gay in China…. it's one of the reasons I chose to write Made in China: The Great Wall. I wanted give some Chinese men a happily ever after even if they are only characters in my series. The Great Wall Blurb:
Destiny will be decided by a battle between heart and mind….

Jun Tai “Styx” Wong loves two things: playing the drums and his best friend, Jin. But being a good Chinese son means he can’t have either—he’ll have to marry a girl of his parents’ choosing and settle into a traditional job. His move to the bigger city of Suzhou is both a blessing and curse, as living with Jin makes it harder for Styx to suppress his desires. Nearly dying while trying to eradicate his feelings serves as a wake-up call for Jin, who takes extreme measures to keep Styx safe from harm.

When given a second chance at life and happiness, will Styx be able to claim the future he wants with Jin, his bandmates, and his music? Can love and hope grow with the constantly looming threat of Styx’s parents ordering him home? Great things await—if Styx finds the courage to break down the wall that stands between him and everything he wants. 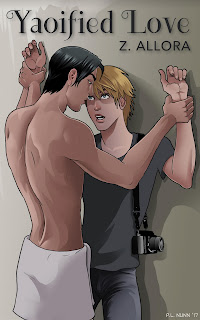 Free Read
Yaoified Love is my gift to readers who want to explore something new.
I usually write in a more yaoified style so I thought I'd share a story that begins at YaoiCon. YaoiCon is a convention that takes places each Fall in San Francisco. Bishie Boys, artists, writers, readers and publishers meet and share their fascination of yaoi.
One of the reasons I found m/m romance was through Yamane Ayano, who penned the Viewfinder series. I was so overwhelmed I traveled from China to go to my 1st YaoiCon to met her in 2010. It was a highlight but the convention was like walking in a living yaoi... to be with so many incredible people who loved yaoi as much as me >>>I was hooked. Yaoified Love is my way of sharing my love of yaoi and YaoiCon with you.
Big hugs,
Z. Allora
Posted by Z. Allora at 3:19 AM 1 comment:

Before there was Yuri on Ice...

Johnny Weir has been spicing up the ice and setting my imagination on fire.

I've begun work on Rocking Thin Ice. This is the video that instantly puts me in the mindset of Blaze my skater.

The Dark Angels: With Wings