Why did I write Rocking Thin Ice?


I love writing about rock stars. I’ve wrote the Made in China series which is about a fledging rock band falling on their face while tripping into love. My first series the Dark Angels follows the antics of an established rock and roll band having wild sex, and finding love.

So hot rockers are my jam.

I have a couple of wonderful but tenacious Facebook Pretties who wouldn’t let a week go by without tagging me on a Johnny Weir videos. He is exactly the type of guy that inspires me to write about characters who are defiant, out to prove a point, somewhat broken, and yet sexy as hell. I started taking notes on my new plot bunny and his story filled my soul… and then the anime Yuri on Ice came out in all of its’ fantastic glory.

Not wanting to appear to be following a trend, I waited another two years to submit Rocking Thin Ice. After watching the issues Adam Rippon had as the only openly gay skater in the Olympics, I knew the prejudice Blaze faced on the ice was still a sad reality for today’s ice skaters.

Tapping into my own love of skating, I joyfully wrote many of the scenes based on my own experiences on the ice. I even announced my book on the ice while skating!

Rock stars and Olympic skaters do go together… especially when one of them as has a crush on the other since he was a teenager. Check out the blurb for Rocking Thin Ice. 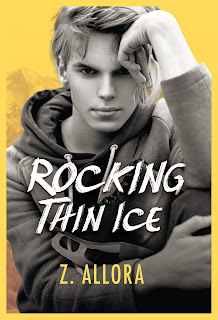 Can a sexy rock star show a relationship-phobic ice skater that there’s more to life than gold medals?

When ice-skating’s bad boy Blaze first glimpses Drake, every fantasy he’s ever had flares to life. Not only is rock star Drake sexy as sin, his songs awaken a longing in Blaze that he’s denied for years. But Blaze Parker doesn’t believe in relationships—at least not those that last more than twenty minutes.

Drake Keys has dreamed about the sensual ice skater for years. When Drake is kicked out of his band because of his bisexuality, he drives across the country to finally see the man he’s had a crush on skate live.

Though the attraction is instant and intense, both Blaze and Drake have baggage that puts any relationship on thin ice. Blaze is driven by a long-ago betrayal to prove himself a champion, and Drake, uncertain about the future, hopes to resurrect his music career. As they take a road trip together, Drake romances Blaze, hoping to melt his heart and show him that love is possible… but not without some tough decisions.

In the Telegraph, an article entitled Chastity belts: The odd truth about 'locking up' women's genitalia by Radhika Sanghani 18 January 2016 gives a very different picture of chastity and reality.
“Albrecht Classen, a professor in the University of Arizona's German Studies explores this in his book  The Medieval Chastity Belt: A Myth-making Process.
He explains that it is highly improbably men in the Middle Ages ever used chastity belts to control their wives’ chastity because it has never been documented and “would be contradicted by modern medical research…. because a woman would not even survive the consequent hygienic and health problems after several days”.
The first ever depiction of a chastity belt comes from a 1405 drawing in a work called Bellifortis. But as this book on engineering also features fart jokes, Classen believes it was included as a joke. Since then most other literary references to the belts are either allegorical or satirical.”

Starting as a joke or not, there are plenty of modern-day devices out there to keep both men and women chaste. As with everything I stress you speak to your partner and understand the risks and safety precautions needed to play within the chastity sphere.

Orgasm Denial:  WHY?
To some this is one of the ultimate power exchanges. The sub denies their ability to orgasm and willingly hands over their ability to control their own pleasure. It can be quite a mind fuck for some because it truly demonstrates in their heart of hearts how much of themselves they have surrendered to their Master.

The sub is denying their orgasm and the Master gets the sadistic boost of being in control. Only they have the ability to allow the sub pleasure. They are taking pleasure possibly quite literally while the sub remains unsatisfied. Many subs report becoming more pliant and willing to do anything the Dom/Master requests at the hope of getting an orgasm.

Over time denial can morph into becoming rewarding and reinforcing even without the gift of orgasm. Some subs are able to transfer their need into serving and pleasuring their Master. Their heightened senses receive intense pleasure from things people not in denial don’t appreciate.

Chastity Devices
Chastity devices for males are usually plastic or steel rings with a rod or provide a tube that fully covers them. Both cage the penis and prevent erections.

Many men describe it as a strong grip on their swollen penis, and the payoff when the device is off makes the denial addicting. Some subs enjoy the constant physical reminder that someone else is in control over their pleasure therefore over them. Feelings of submission arise and some even desire to feel owned.

The person holding the key is called the keyholder. (I wonder how they came up with the title?) They usually the focus of the locked sub’s attention.

Denial
Denial is like going on a diet. As soon as you start to eat healthy all you want is junk food. The absent of sexual release means there is a major focus on it or the lack of it. Many subs I’ve talked to say that being in denial usually makes them more sexual, and needy. The desperation makes them more loving and attentive to their keyholder/Dom/Master.

Release
When the denial is over, the resulting orgasm can be amazing. The sub might have a stellar experience which makes all the frustration worth it. The longer orgasm is withheld, the stronger it is… most times.

However, sometimes the sub’s body could betray them. The male can ejaculate without orgasm. It’s as if the sub’s body doesn’t know what to do so doesn’t provide the expected pleasure.

Or the keyholder/Master may decide to simply ruin the orgasm. There are lots of techniques to accomplish this: stopping all stimulation a stroke away from orgasm to pain. So the fluid pours out but the pleasure ebbs away. The keyholder knowing your sub’s body allows them to make the most out of the experience. I’ve heard of ruined orgasms described as an anti-climax and instead of providing relief only makes the sub insane with no or little gratification. And if the sub is male it could be hours for recovery to take place for even a shot at an actual orgasm.

The keyholder/Master may decide to milk the prostrate without pleasure. (Keep in mind stimulating the prostate and penis together can result in very powerful orgasms.) However, the keyholder can use their fingers or a prostate massager and simply stop the stimulation at the right time letting the fluid leak/flow out.

In the article Different Male Milking Techniques for More Control by John Published on April 10, 2015 various strategies are shared. This is an excerpt from how to have the male release his fluid with minimal pleasure:

“When I’m being milked, the ‘hollow pleasure’ of prostate stimulation is almost psychologically like a promise of a lot more pleasure to come (if you’ll pardon the pun!), it is utterly delicious in an orgasm denial scenario to be denied any pleasure but to have my prostate drained anyway, thus preventing any chance or orgasm in the next while (probably about 6 hours minimum for me)….
Keep the gentle rhythmic massaging going and look out for the point where you can feel the prostate and surrounding area contracting.  At this point, reduce the massaging and prepare to stop just at the point where orgasmic contractions are about to start.  In my experience there are two stages of contraction in the male orgasm—the prostate goes hard and contracts to initiate ejaculation and then the pleasurable orgasmic contractions (perhaps six or seven of them) follow. What you’re aiming to do is keep stimulation going up to the point that the initial (less pleasurable) prostate contraction is about to start, then cease prostate stimulation for a few seconds (5 or so) and then restart gentle milking to clear the fluids out of the prostate but all the time keeping stimulation below the threshold for orgasmic contractions. It’s tricky to do the first time but if you pause milking before orgasm begins you should be OK.
Depending on the male and how much extra stimulation you give him, this procedure will take anything between 10 and 40 minutes. If it’s taking a while then verbal reassurance that this is OK will probably put your man’s mind at ease, he may have been worrying that he’s not performing and find it a massive turn on that you’re spending this time to milk him in such a subtle and devilish way.”  (https://bit.ly/2NNRhkq)
Cheating the Device
Of course there are videos on any number of porn sites showing men in chastity outsmarting the device either being able to slip out of chastity or by using a vibrator or dildo to bring about an ejaculation. Though even this cheating pleasure is dampened not only by not staying true to your keyholder/Master but physically it usually isn’t a fully satisfying orgasm due to the device.

Always seek your own truth.

I’d love to hear from you so comment here or use the contact information to touch base with me privately.